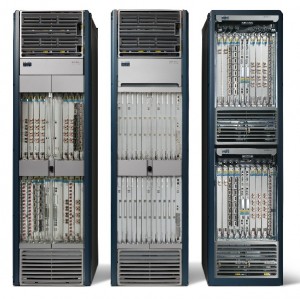 Cisco announced that Guinness World Records, an authority for record-breaking achievement around the world, has certified the Cisco Carrier Routing System (CRS-1) as the highest capacity Internet router ever developed. The new router will be the first networking technology to be recognized by Guinness World Records.

The CRS-1, announced in May, is designed to shuttle traffic across the backbone of the Internet. The company spent four years and $500 million developing the technology, and even created a new software operating system for the product. Cisco claims that the router can reach a routing throughput of 92 terabits, or 92 trillion bits per second. With this kind of capacity, the entire printed collection of the U.S. Library of Congress could be downloaded in 4.6 seconds. The same feat using a dial-up modem would take around 82 years.

I have good interest in technology and gadgets field. I like to share latest technology news through this site . Also blogging on CyberVally.com
Previous Gtalk on mobile using Gotalkmobile
Next Enable SSH access in Cisco ASA 5510