The Matrix is a 1999 science fiction-action film written and directed by Larry and Andy Wachowski. The film depicts a future in which reality as perceived by most humans is actually a simulated reality created by sentient machines to pacify and subdue the human population, while their bodies’ heat and electrical activity are used as an energy source.
Matrix wallpapers and Matrix effects are even popular today. When we hear the word ‘matrix’ first thing that come into our mind will be the green matrix effect.
Here, I have one trick to make matrix effect in DOS. Its pretty and simple. Just see how i used ‘color’ and ‘goto’ functions in this program. 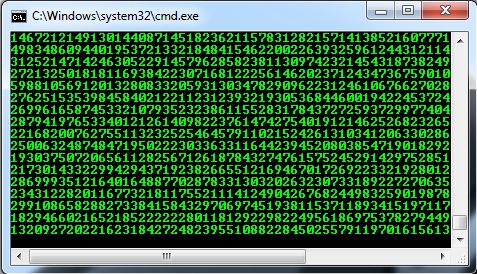 This application is just for fun also learn the usage of %random%. Here we used  %random%, this is for getting some random numbers. This command can be used to create some random values in other scripts. We have described color function in earlier posts. Here “color a” for green text. You can see the loop also

Copy the bellow text and paste to notepad then save it as ‘filename’.bat

Interested in blogging, chatting, tweeting... I would like to share my little knowledge about mobile and computer. I also blog @ http://shajanjp.blogspot.com , I am on twitter @shajanjacob.
Previous Identify unknown device driver manually
Next Technical help line toll free numbers

Bat file to get File size in human readable format